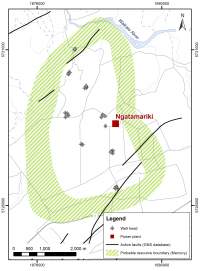 The Ngatamariki Geothermal System is located within the Waikato Region, 5km south of Orakeikorako and 17 km north-east of Taupo. The Ngatamariki Geothermal Development is located within what was the Tahorakuri Forest, and is bordered by farmland to the east and west, and the Waikato River along the northern and southern boundary. The field covers an area of about 7 to 12 km2.

The Crown drilled four exploration wells in 1985-86, with four further delineation wells drilled by Mercury Energy from 2008, including one well 3,373m deep. The resource temperature ranges from 255°C up to 290°C.

Ngatamariki’s geology to +200m RL is dominated by surficial deposits of alluvium, including Orakonui Breccia and Whakapapataringa rhyolite, and lacustrine sediments of the Huka Falls Formation. Underlying the near surface volcanic-sedimentary sequence is crystal-rich tuff and breccias of the regionally-extensive Wairoa Formation, partly welded crystal-lithic Wairakei Ignimbrite, and Akatarewa Ignimbrite and andesite (Tahorakuri Formation). Torlesse greywacke (basement) beneath the andesite layer has been intersected only by NM6 to date. Underlying the andesite lava and breccias in NM4 is a quartz diorite pluton.

Compared with other geothermal fields, the Ngatamariki field has few surface thermal features and only a small outflow of geothermal fluid. The surface features that are present are located at the Ngatamariki hot springs where sinter, pools and hot springs are part of a reserve administered by the Department of Conservation. A hydrothermal eruption was reported in 2005.

The geothermal ferns Christella aff. dentata (“thermal”), Cyclosorus interruptus and Dicranopteris linearis are present. D. linearis is known from only c.23 sites in New Zealand. Psilotum nudum, a plant restricted to geothermal and northern coastal areas, geothermal kanuka, and the geothermal moss Campylopus capillaceous are also present. The geothermal fungus Lycopodiella cernua is found at the Orakonui Springs. i 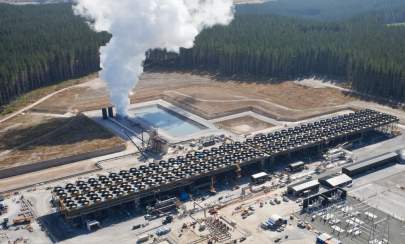 The Ngatamariki Power Station was commissioned in 2013. It has four Ormat 20.5 MW(e) binary cycle units with a total rated capacity of 82 MW(e), which are the largest Ormat Binary Cycle units in the world.

The steamfield comprises seven geothermal wells, including three production and four re-injection wells, each extending to a depth of more than 3,000m. There are also 21 monitoring wells, drilled to a depth of up to 1,500m. A make-up well was drilled in 2017.

Based on stored heat models, the energy development potential is about 175 MW(e).