The Rotorua Geothermal System underlies much of Rotorua City and the southern margin of Lake Rotorua. It covers an area of about 15km2.

The resource is managed under the Bay of Plenty Regional Policy Statement and the Rotorua Geothermal Regional Plan which promote the sustainable management of the system. There is limited potential for further extractive use and any development must ensure that surface features are protected.

Summary of rules for taking geothermal water from the Rotorua System:

More than 900 shallow wells have been drilled at Rotorua for space and water heating for private homes, hospitals, schools, motels, hotels, and other commercial and industrial uses. At peak use, around 430 wells were operating. Currently fewer than 300 production and injection wells are operating, for approximately 140 consents takes. About 90 of the wells are less than 200m deep and typically recover geothermal fluid at temperatures of 120 to 200°C.

The natural features associated with the field, particularly the geysers and hot springs of Whakarewarewa valley, are one of New Zealand’s foremost tourist attractions. Whakarewarewa has the largest remaining concentration of geysers in New Zealand. There are also thermal features at Kuirau Park, Government Gardens, Ohinemutu, Arikikapakapa, Ngapuna and Sulphur Point. Features also include areas of geothermal vegetation. . Bay of Plenty Regional Council has mapped these surface features and has a surface feature monitoring programme. 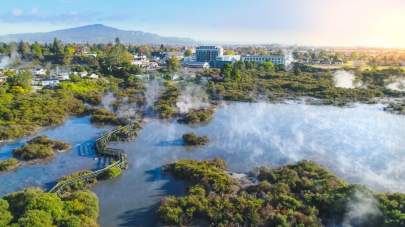 Rotorua’s geothermal surface features have been used in a low impact way by Māori for hundreds of years, for practical as well as spiritual purposes. Rotorua geothermal field, BoPRC website.

Increased use of geothermal energy in the 1960s and 1970s was inefficient, with very little reinjection of fluid.

In the late 1970s there were significant changes to the surface features at Whakarewarewa and there were concerns that this was related to a decline in the geothermal aquifer pressure resulting from the level of draw-off from the Rotorua wells. In 1982 the Government set up a programme to monitor the geothermal reservoir. Initial work under the monitoring programme established that the output from the production wells represented a net withdrawal from the aquifer equivalent to a total mass flow rate of between 30,000 and 35,000 tonnes per day of geothermal fluid. This compared with a natural discharge of around 8,000 tonnes per day from Whakarewarewa.

In 1985 the then Ministry of Energy published a comprehensive report concluding that there had been a dramatic decrease in natural activity at Whakarewarewa, including a 30% drop in natural heat flow between 1967 and 1985. The Government responded by embarking on a programme of compulsory well closure within 1.5 km of Pohutu Geyser. A field management regime was also put in place. By 1990, fewer than 150 wells were still operating at Rotorua.

In 1991 the management of the system passed to the Bay of Plenty Regional Council, which now manages the resource under its Rotorua Regional Geothermal Plan. A comprehensive monitoring programme has shown that the aquifer pressure has increased significantly and many natural features have recovered, although not all.

Low level direct heat use is likely to continue in Rotorua, with a move to efficient technologies such as downhole heat exchangers. The potentially large resource is unlikely to be used for large scale electricity generation because of the effect this could have on the Whakarewarewa geyser field.

Based on stored heat models, the energy development potential is about 35 MW(e).