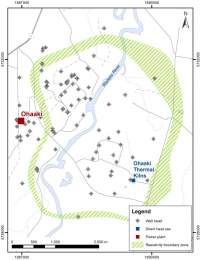 The Ohaaki-Broadlands Geothermal System is located within the Waikato Region, 20 km northeast of Taupo, immediately south of State Highway 5. The field covers an area of about 5 to 11 km2.

Ohaaki Steamfield East is of regional significance because it is partially protected by a QEII National Trust covenant and is a relatively large example of geothermal habitat, which includes the nationally uncommon ecosystem type, geothermally heated dry ground. The site also contains a good population geothermal kānuka.

The Ohaaki power station, with its conspicuous 105m high cooling tower, was commissioned in 1989 and is owned by Contact Energy.

The station commenced with a capacity of 114 MW(e) although declining steam production has led to a series of deratings – including decommissioning of one of their high-pressure turbines. (When designed, the HP turbines were expected to have a ten-year service life, before the field pressures would have dropped so that the HP system would be retired). Steam production has further declined due to cool water from the field margins encroaching on production wells. Output dropped to as low as 30 MWe but an investment programme, including several new wells, has restored production to about 50 MWe (450 GWh/year).

There have been significant environmental effects at Ohaaki, including subsidence leading to flooding.

60% of produced fluid is injected, mostly through outfield injection. Much of the balance of fluid is lost through the cooling tower and about 4-5% is fed to a wood drying kiln operation. This then discharges fluid to a previously active surface feature and subsequently the Waikato River.

There have been lucerne drying operations and geothermally heated greenhouses at Ohaaki in the past.

Based on stored heat models, the energy development potential is about 110 MW(e).