Geothermal energy is effectively a renewable resource that does not consume any fuel or produce significant emissions. Although some geothermal fields have been degraded, none have ever been exhausted and sustainable development is possible. Geothermal energy also has the advantage over other renewables that it is independent of climatic variation.

Geothermal energy is a relatively low-cost and indigenous generation option that can contribute to New Zealand’s growing demand for electricity. It is uniquely reliable, with geothermal power stations typically achieving load factors of 95%, compared to typical load factors of 30 – 50% for hydro and wind power stations. The Wairakei power station has operated at a load factor of more than 90% for over 40 years with low operating costs. This inherent reliability makes geothermal generation a valuable component in a diverse electricity supply system such as New Zealand’s.

There are geothermal generation opportunities on either side of Auckland (i.e. Northland and the Taupo Volcanic Zone), the principal demand centre for electricity in the North Island. Proximity to Auckland, assuming sufficient transmission capacity, provides an efficient, low-cost electricity supply option. Geothermal fields are also commonly coincident with major forests and their energy-intensive processing industries, allowing symbiotic development of each resource.

An important aspect of recent investment in geothermal projects is the development of partnerships between power generators and Maori trusts. Maori commonly have the land access rights to geothermal fields, and geothermal projects are increasingly delivering economic benefits to local Iwi.

Geothermal tourism has a long history in New Zealand. Te Arawa iwi oral histories recount early visitors near Rotorua and Taupo districts and missionaries captured interest in geothermal attractions with their vivid descriptions, drawings and paintings. The early tourists came to bath in thermal waters and to see the geysers, springs, mud pools, and the once visible giant Pink and White Terraces of Lake Rotomahana (destroyed in 1886 by the eruption of Mount Tarawera). International tourism followed and by the 1860s, the people of Tuhourangi (local iwi) were fully engaged in tourism.

Interest in natural features and in the healing qualities of geothermal fluid continued to grow and today it contributes significantly to the local and national economy, including growing investment and leadership by Māori. Experiences include visiting natural features, and learning about Maori cultural links and traditional uses of the resource. People enjoy bathing in natural geothermal waters throughout New Zealand, from Ngawha Springs in Northland to Westland in the south and ‘wellness’ tourism is also an area of potential growth, provided the resource is managed sustainably.

The Whakarewarewa valley within the Rotorua geothermal field is currently the most visited tourist area in New Zealand, including the attractions of Te Puia and Whakarewarewa Village.

Geothermal fluids also carry potentially valuable minerals such as lithium (for batteries) and amorphous silica (for semiconductors). Over the years several parties have conducted experimental extraction trials but none to date have proven economic. Currently the GEO40 company operates a pilot plant at Ohaaki for extracting ultra-fine silica for export markets http://geo40.com

New Zealand’s geothermal resources have been used for many years. Geothermal areas are important to Māori, who use the heated waters for cooking, washing, bathing, warmth, preserving, ceremonial use and healing. Māori also use geothermal minerals as paints, wood preservatives and dyes. In recent years, Māori have become significant players in the geothermal space with several of the major operators owned by iwi. Through many Treaty of Waitangi settlements, many iwi have had land returned to them and their traditional relationships with the geothermal resource formally recognised by the Crown.

Other key uses include tourism, mineral extraction, direct heat use and electricity generation. 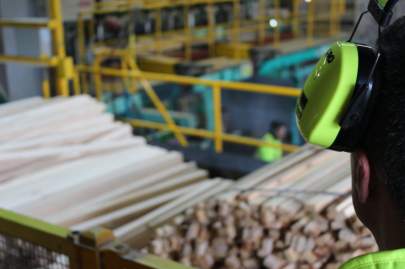 Direct use involves using geothermal heat directly (without a heat pump or power plant) for such purposes as heating buildings, industrial processes, domestic heating, greenhouses, aquaculture, public baths and pools. Direct use can use high and moderate to low temperature geothermal resources. Existing developments have generally been on an individual basis rather than capturing the benefits of combined use for district heating or industrial parks.

There is a wide range of direct uses in New Zealand for which consumer energy totals about 8 PJ. The largest geothermal direct user in the world is the Norske Skog Tasman pulp and paper mill at Kawerau. With an installed capacity of 210 MWt and an annual energy use of 7.5PJ, the plant uses geothermal fluids to generate clean process steam for paper drying, a source of heat in evaporators, timber drying and increasingly for electricity generation

Very low temperature resources can also be exploited for heat applications using ground-source heat pumps to provide space heating and cooling. This is a practical technology that can be used almost everywhere in New Zealand where some groundwater occurs and offers significant opportunities for electricity conservation; however, it cannot be used for electricity generation. For more on ground source heat pumps. 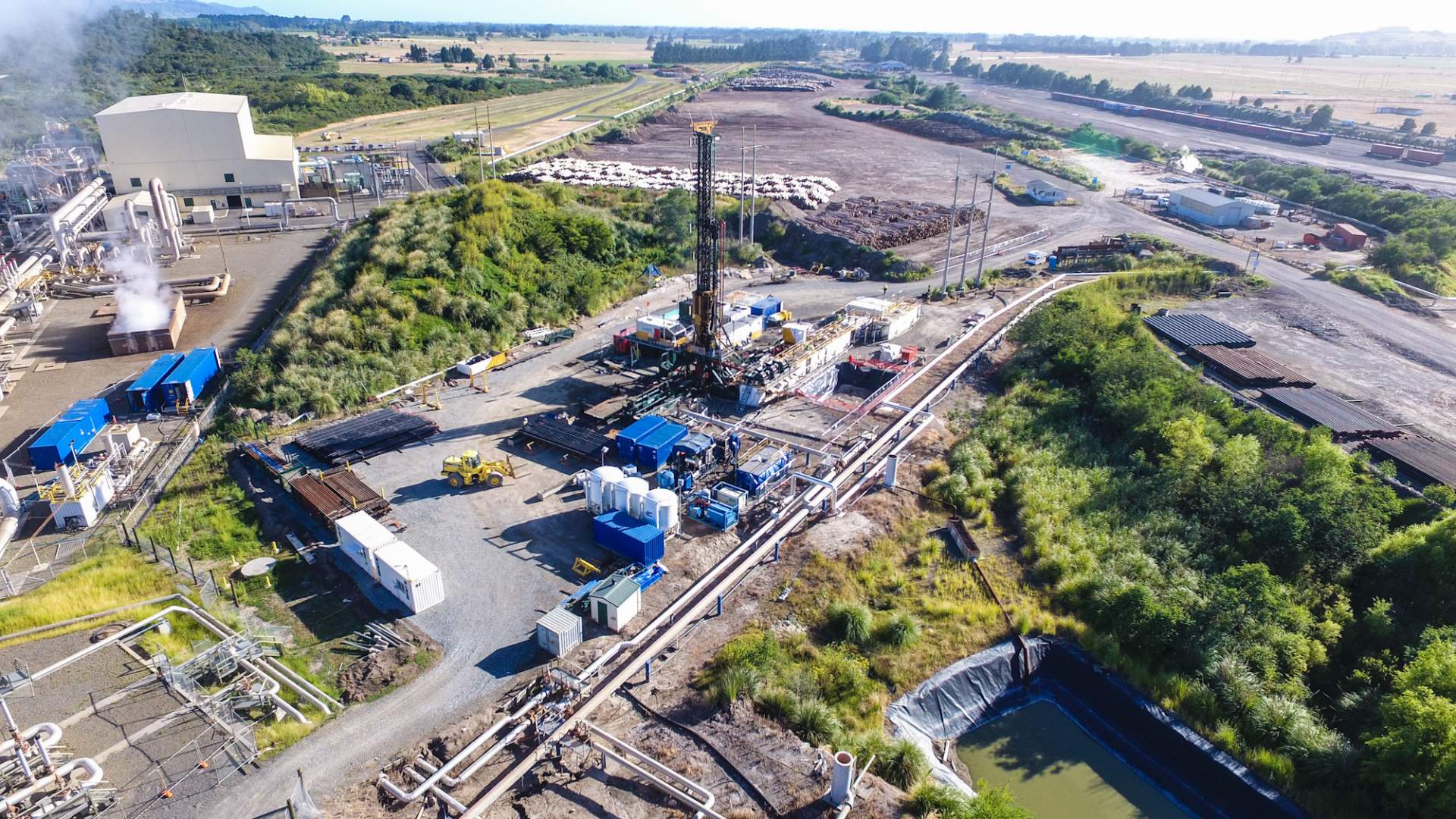 The information on this page is now out of date. The NZGA will be updating this page with the latest potential for geothermal development estimate.

Geothermal energy has the potential to make a significant contribution to New Zealand’s energy requirements, either through electricity generation or, with even higher levels of efficiency, as a direct source of heat. However, because geothermal steam cannot be transported for more than a few tens of kilometres, the opportunities for direct use are limited and large-scale electricity generation is the most attractive option.

New Zealand has substantial geothermal resources that are accessible and untapped. A comprehensive assessment of New Zealand’s high temperature geothermal resources is that by Lawless (2002), the total resource is estimated as equivalent to a about 3600 MWe of electrical generation, using only existing technology. Almost 1,000 MWe is currently installed, so existing development represents about 30 % of the total high temperature resource.

Conventional geothermal systems occur naturally, due to deep heat sources such as magma chambers, which most often occur near plate boundaries where tectonics has induced melting of the Earth’s crust. The fluid in most geothermal systems is groundwater which is heated near this deep heat source and then moves upwards closer to the surface, a heat transfer process called convection. Geothermal systems are therefore dynamic systems, the size and shape of which depends on the depth and temperature of the heat source and the permeability structure of the shallower rocks through which the convecting fluid moves.

The chemical content of geothermal fluid depends on the original composition of the groundwater, any inputs of fluids from the magma chamber (or deeper), the composition of the rocks through which the fluid travels, and the pressure and temperature (which affect the rate of fluid-rock interaction). Geothermal fluid contains CO2, methane and hydrogen sulphide, and in the natural state (pre-development) these are discharged through obvious natural surface features such as fumaroles and bubbling pools, and less obviously as a flux through the soil.

It is useful to consider emissions for electricity generation in terms of an “emissions factor” (also called “emissions intensity” or “carbon intensity”) of grams CO2-equivalent per kilo-watt hour gCO2(eq)/kWh, which enables comparison to electricity from other energy sources. The measure “grams CO2-equivalent” is a useful way to combine the CO2 and methane into one number – it is the mass of actual CO2 plus an equivalent mass of CO2 to represent the methane. As a greenhouse gas, methane has 25 times more impact than CO2 and so the mass of methane times 25 gives the equivalent mass of CO2.

The emissions factors for geothermal power stations in New Zealand for the calendar year 2018 are given in the table and figures below. These are the emissions of CO2(eq) released from the geothermal fluid during operation of the plant. The median emissions factor for 2018 is 62 gCO2(eq)/kWh and this is a standard measure of the central tendency of this kind of dataset with outliers. The use of the median (and other percentiles) is the same approach as used by the IPCC in the 2011 Special Report on Renewable Energy Sources and Climate Change Mitigation. Another useful statistic is the weighted average of 76 gCO2(eq)/kWh, which is weighted using the total energy generated from each plant, thus accounting for the fact that not all plants are the same size and hence their individual numbers for emission factor do not carry the same weight. 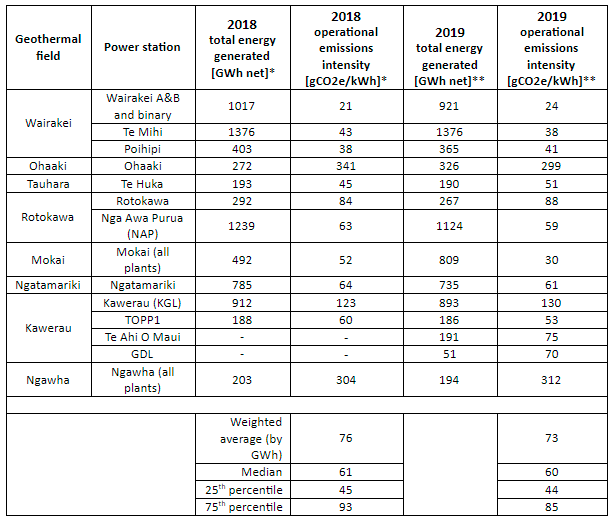 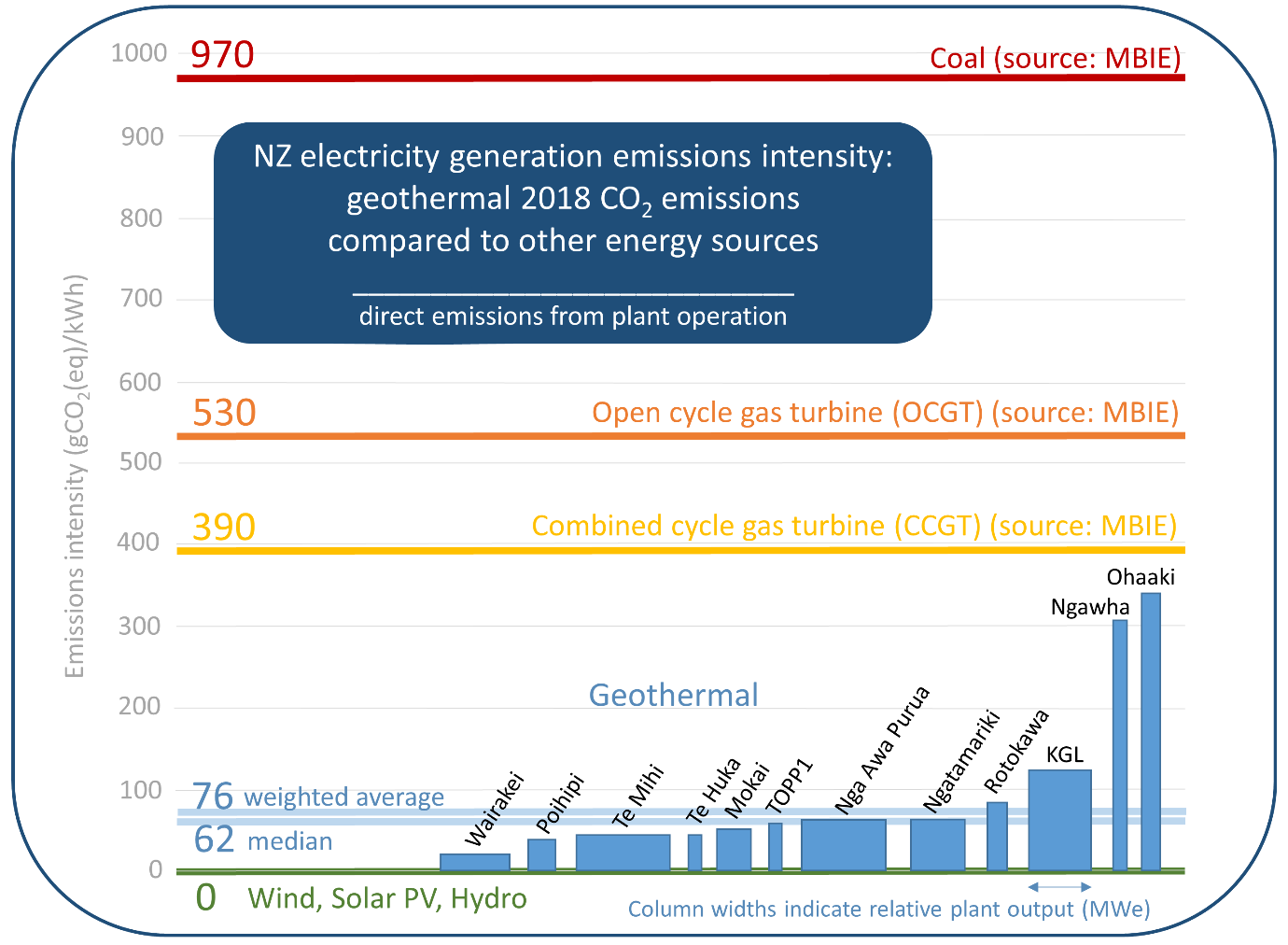 For comparison, the emissions factors from other renewable energy sources during operation are:

All the emissions factors discussed so far are for operation of the plant only. For a true comparison between the different energy sources, the full life-cycle of the plant needs to be considered. A life-cycle assessment (LCA) includes carbon emissions related to: materials/construction, operation, and decommissioning. An international review of LCAs for all energy sources is available in the 2011 IPCC Special Report on Renewable Energy Sources and Climate Change Mitigation (see figure and table below). 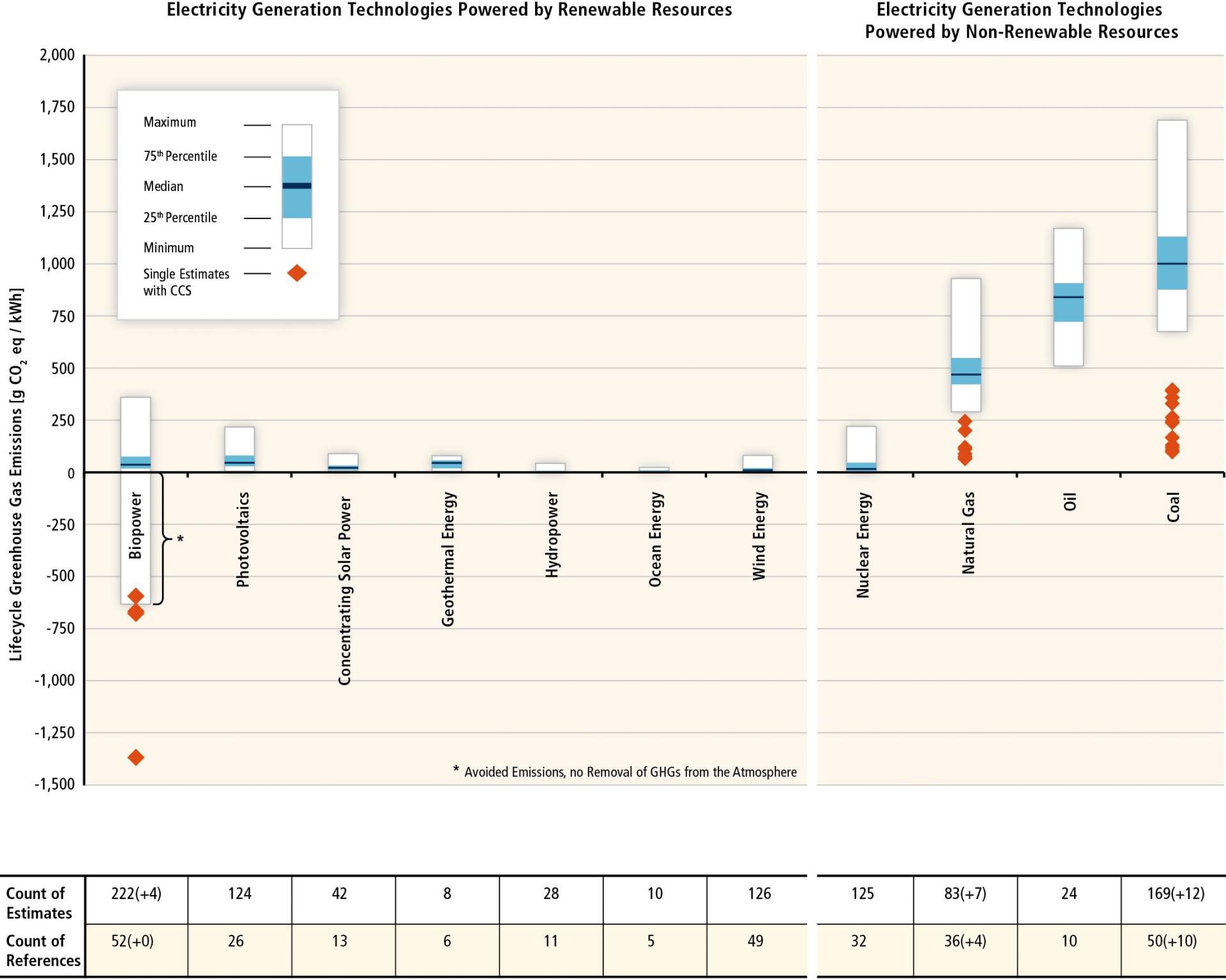 For all the energy types currently present in NZ, median LCA CO2(eq) emissions factors from the IPCC report are as follows:

The IPCC life-cycle (LCA) median emissions factor for geothermal is 45 gCO2(eq)/kWh, which seems low when the median NZ emissions in 2018 were 62 gCO2(eq)/kWh from operation only. This may be due to the limited number of geothermal LCAs – only 8 data points met the criteria to be included in the IPCC review. All the other energy types had many more LCAs and are likely to be more representative.

Although the true median geothermal life-cycle emissions factor will likely be higher, it is still useful to consider these life-cycle numbers, as it can be seen that:

Geothermal emissions intensities are relatively complex, and change over time. The intensity decreases due to field degassing, and can increase or decrease to some degree due to operational changes to the steamfield or plant, as shown schematically in the figure below. Additionally, there are two important factors which offset some of the CO2(eq) emissions from geothermal electricity generation, which are not usually accounted for: 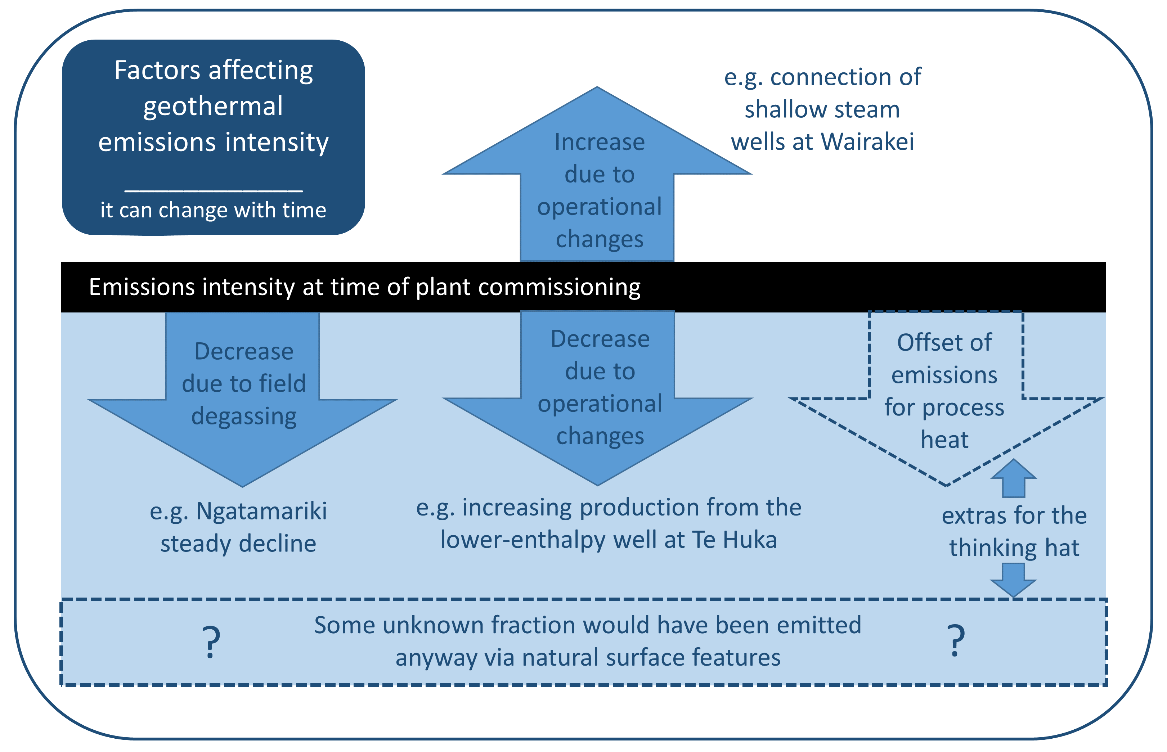 Other Commentary and Information

A number of companies have analysed their processes, determined that it is cost effective to make an application for a unique emissions factor and have subsequently applied for and been granted a unique geothermal emissions factor.

The carbon emissions scheme effectively taxes industries for their emissions. For the geothermal industry, which has comparatively low carbon emissions, this increases their economic performance with respect to other higher emitting generators.