This note provides an annual snapshot of trends in the international geothermal power sector in 2019 for the interest of NZGA members.   This annual review has been delayed due to the extended reporting season caused by COVID-19.

World geothermal generation rose 2.2% from 83.6 to 85.5 GWh in 2019.  This continues the slow but steady growth since 2013 and the aftermath of the World Financial Crisis.  Generation increased substantially in Eurasia (mostly Turkey), Africa (Kenya), and the Asia Pacific (mainly Indonesia).

In contrast, generation continued to fall in North America, as steam supply in mature fields in the USA and Mexico continue to decline. 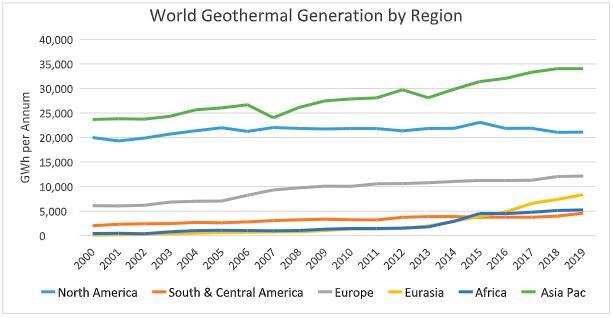 In all, 29 countries reported geothermal generation in 2019.  No new countries entered the electricity market.  This follows a flurry of recent entrants including Honduras (2017), Croatia (2018), and Chile (2017).

In 2019 the top ten producing countries produced 91% of the world’s generation (Figure 2).  The USA still hold top spot as the largest generator with Indonesia and the Philippines second and third respectively.  Mexican and Japanese output declined.  Kenya and Turkey recently entered the top ten and have overtaken more established producers.  Both these countries are emerging centres of geothermal expertise. 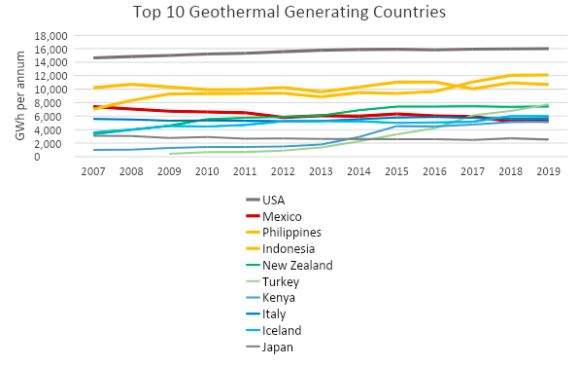 While the USA remains the top generating country, the balance of power among geothermal operators has decisively shifted to the Western Pacific (Figure 3). 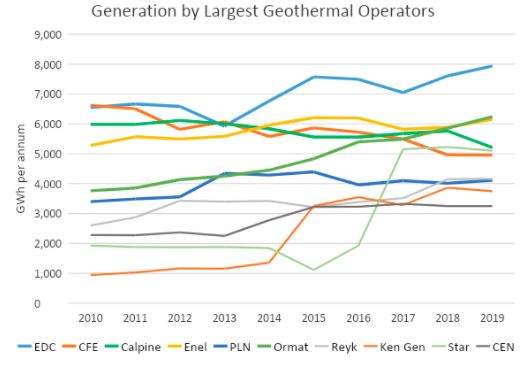 The Asia Pacific region now hosts four of the top 10 operators; three reside in North America, with two in Europe and one in Africa.

Interesting, most of the top 10 producers remain focused on domestic markets.  Only Enel and Ormat have significant geothermal producing assets outside their home country.   However other countries are moving in this direction.  EDC has assembled an impressive exploration portfolio in South America and Indonesia, while Japanese utilities Kyushu Electric and Tohoku Electric Power have geothermal generation investments in Indonesia.

Energy markets continue to discourage fuel specialisation.  Of the three most geo-centric companies, two (EDC and Ormat) are now diversifying their generation portfolios into solar, wind, and storage, possibly reflecting shifting costs but also responding to growth opportunities.   For the other top 10 operators, geothermal remains a subset of their generation portfolios.

Mergers and acquisitions activity was muted from 2019 through 20.  A handful of transactions either consolidated or swapped interests in specific projects.   The recent acquisition of Thermochem by Kyushu Electric reflects a common trend towards vertical integration.  Operators such as KenGen, EDC, PGE, Ormat, and LaGeo now maintain in-house capability in drilling engineering, well services, well testing, and steamfield maintenance.  One possible conjecture is that the oil and gas drilling and well service sector has failed to deliver value to the geothermal industry.

This drift towards vertical integration may also reflect the increasing difficulties electric systems face trying to balance the imperatives of decarbonisation while providing an increasingly essential service at politically acceptable prices.  These tensions are blurring traditional lines between public and private economic activity, as well as exposing the sometimes archaic structures of electricity markets.   It seems unlikely such tensions will be relaxed without system architecture reforms.

Meanwhile, worldwide growth is diversifying geothermal expertise as emerging operators reach critical mass.  Up and coming operators include Pertamina Geothermal Energy (IDN), who will likely break into the top 10 before 2024.  Gurmat Enerji (TUR) and Supreme Energy (IDN) are fast joining Zorlu Energie (TUR) in the 300 club (operators with greater than 300 MW of capacity).

Regrettably, there are no systematic annual international drilling statistics.  The World Geothermal Congress 4 to 5 year statistics are helpful but limited. Consultant Rystad Energy estimates that 223 geothermal wells were drilled in 2019.  While it’s difficult to verify this, drilling activity seem to cluster in high-development regions such as Kenya, Turkey, and Indonesia.  The dearth of drilling activity and resulting atrophy of skills in some mature geothermal markets such as Japan and perhaps Mexico could become a barrier to future development.

This development activity is stimulating new geothermal technologies.  Interesting projects worth following include:

Testing of the long-reach, horizontal wells of the Estevan, hot sedimentary acquirer, project in Canada.

Performance testing of the GreenLoop system.

Some individual companies also report their generation in annual reports and this augments the national data filed by national system operators, ministries of energy, and international energy organisations such as the IEA.

Kamchatka (Russia) is included in the Asia Pac because it is situated on the Pacific Rim.