The 42nd Geothermal Workshop was held on 24th - 26th November at Copthorne Hotel & Resort, Bay of Islands. After a year of uncertainty, and the cancellation of the NZGA Winter Seminar in August, there was relief all round that the Workshop successfully went ahead. Over 200 in person delegates, and 70 virtual attendees contributed to a busy week of industry discussion and interaction.

The Workshop opened with keynote speaker, Andy Blair, giving an overview of the global geothermal community, from her perspective as president of the International Geothermal Association. This included highlighting the rebranding of the USA's Geothermal Resources Council to Geothermal Rising, and how the geothermal community should approach spreading their message further afield. This proved to be a common topic throughout the rest of Workshop, and opened up many avenues of discussion.

The Workshop's location was chosen due to the proximity to Ngawha Power Station, Top Energy's geothermal plant which is currently undergoing a major expansion. Top Energy's CEO, Russell Shaw, was another keynote speaker, who gave a comprehensive update on the expansion project, as well as an overview of Top Energy's intentions going forward. Stability of energy supply in the Far North has always been a hot topic, and Top Energy hope that Ngawha's location and capacity will be an ideal solution for the community.

Linda Wright from the NZ Hydrogen Association provided an excellent alternative perspective of the energy industry in her keynote speech. Incorporating the virtual element, the final keynote speaker was Daniela Blessant from Universidad de Medellin in Colombia. She delivered her talk via video link, and then engaged in a Q & A session from both in-person and virtual attendees. Her speech covered her experience with geothermal research in Colombia.

A panel session was held on the final day of the Workshop, led by NZGA's Katie McLean, and comprised of Andy Blair (Upflow / IGA), Isabelle Chambefort (Geothermal Next Generation / GNS Science), Mike Dunstall (Contact Energy) and Michael Stevens (Mercury). The discussion centred strongly around the continuing theme of how geothermal energy is perceived outside of the geothermal community, and how to create greater awareness around the resource.

The Workshop was divided into 3 streams of talks throughout each day; a mixture of scientific papers, industry updates, and international lectures delivered by video link. The mixed format of the conference was very well received, and having each stream recorded ensured that delegates could watch any talks that they had missed at a later date.

The NZGA held their AGM on the Wednesday of the Workshop, providing members with a brief update of the activities undertaken in the past year. It also marked the start of the new term for Board members, welcoming our new Board and Executive Committee into their roles.

The conference dinner was held at the Duke of Marlborough Hotel in Russell. The ferry ride there from the hotel was the perfect opportunity to take in the surroundings, and appreciate the unique location of the Workshop. During the dinner, the NZGA awarded their contribution certificates. These went to:

Chris Bromley - For service to the New Zealand and international geothermal industry, including highly effective editorship of the Geothermics Journal, Chair of IEA-GIA (March 2007 to October 2015) and IEA-GIA Vice-Chair (October 2015 to present).

Sadiq Zurrouk - For his ongoing work since 2006 in the New Zealand geothermal community, particularly education, including sitting on the boards of the IGA and NZGA, mentoring many international and local students through the Geothermal Institute, arranging the annual Geothermal Workshop, membership of IDDP and AGGAT.

Katie McLean - For her excellent work quantifying greenhouse gas emissions from geothermal power stations on behalf of the NZGA, and for her continued strong contribution on the NZGA board.

Ian Richardson - For his excellent work quantifying greenhouse gas emissions from geothermal power stations on behalf of the NZGA, and for his continued strong contribution on the NZGA board.

The NZGA also awarded Lifetime Membership to Pat Brown: For his ongoing drive and support for the geothermal community including as NZGA Board member 2004 - 2009 and Treasurer 2007 - 2009, and for playing a major role in helping to initiate and manage the Tuaropaki and NTGA geothermal developments. 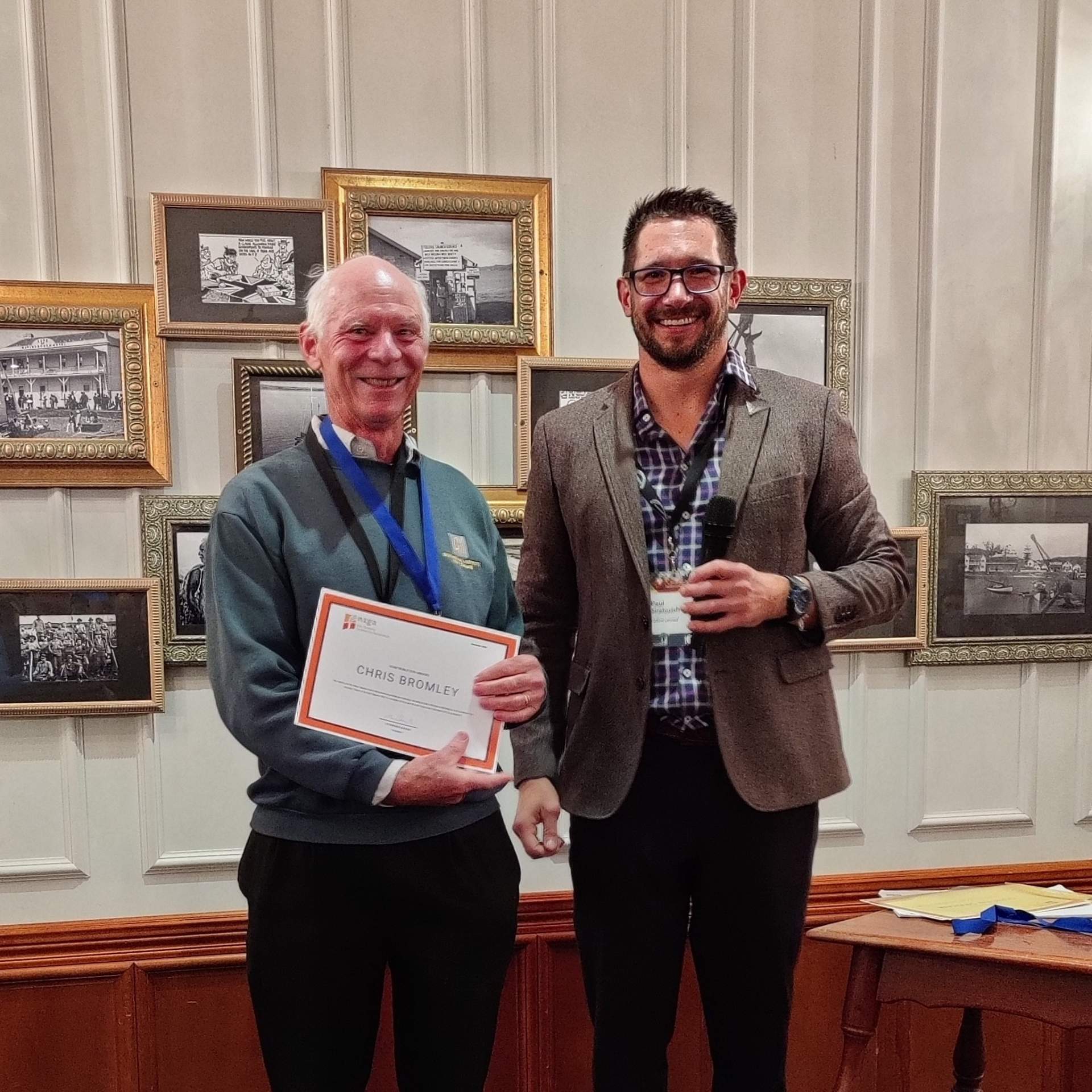 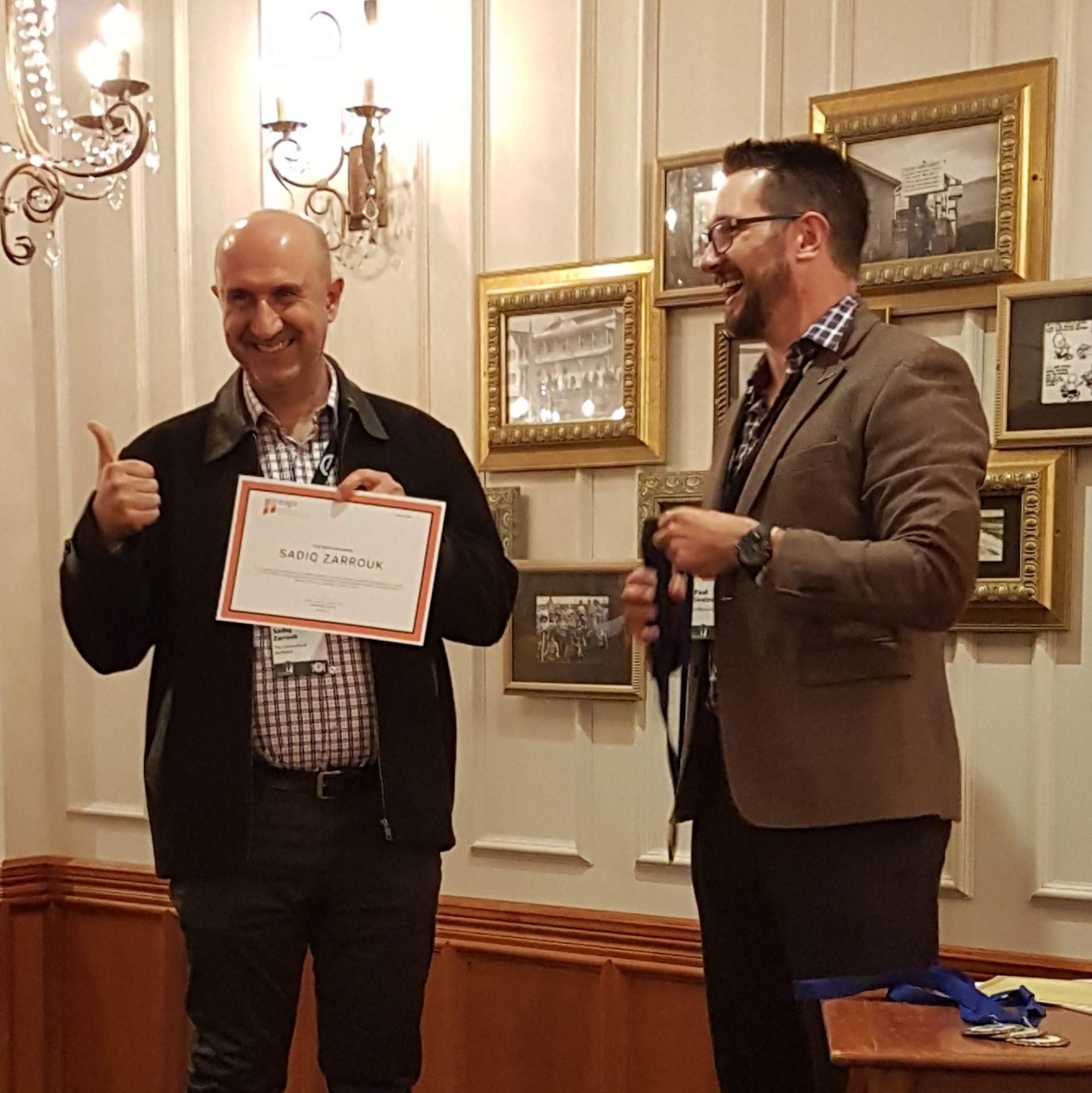 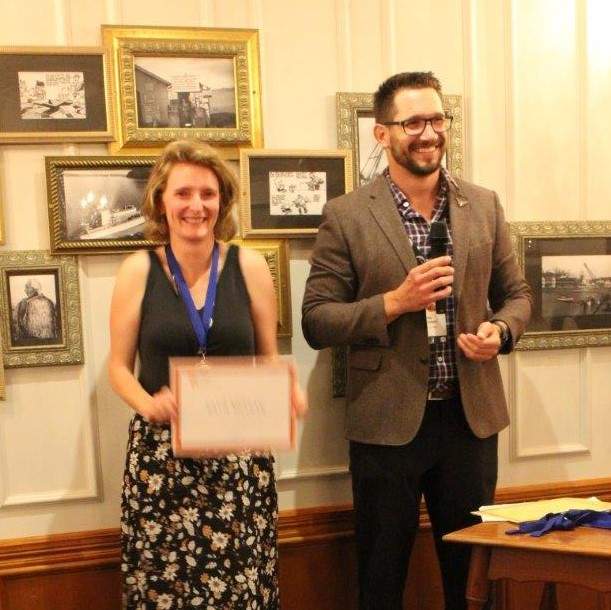 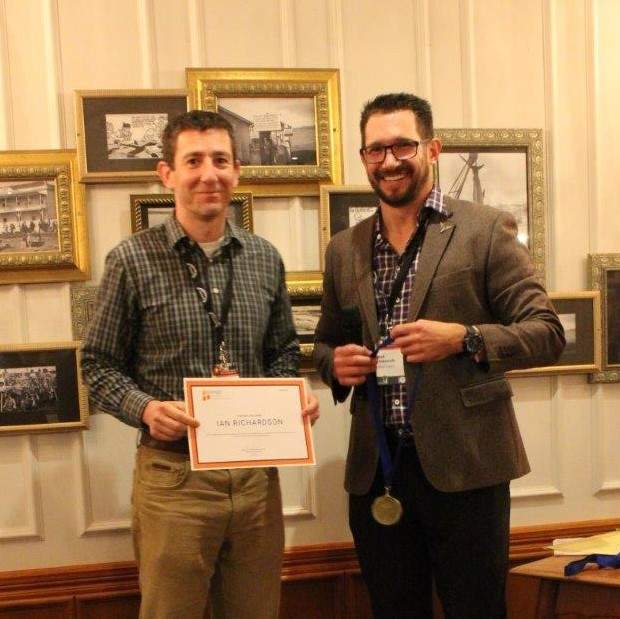 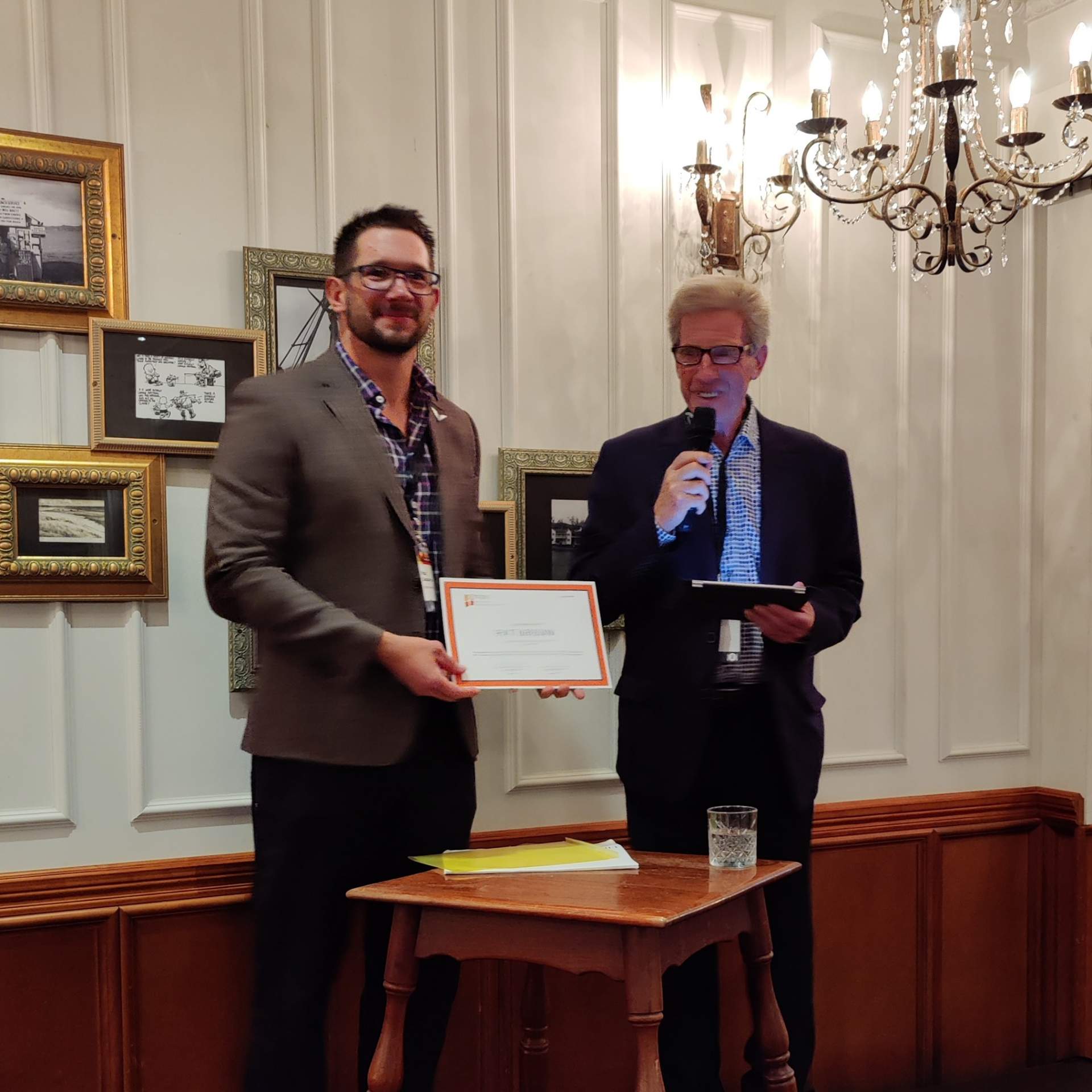 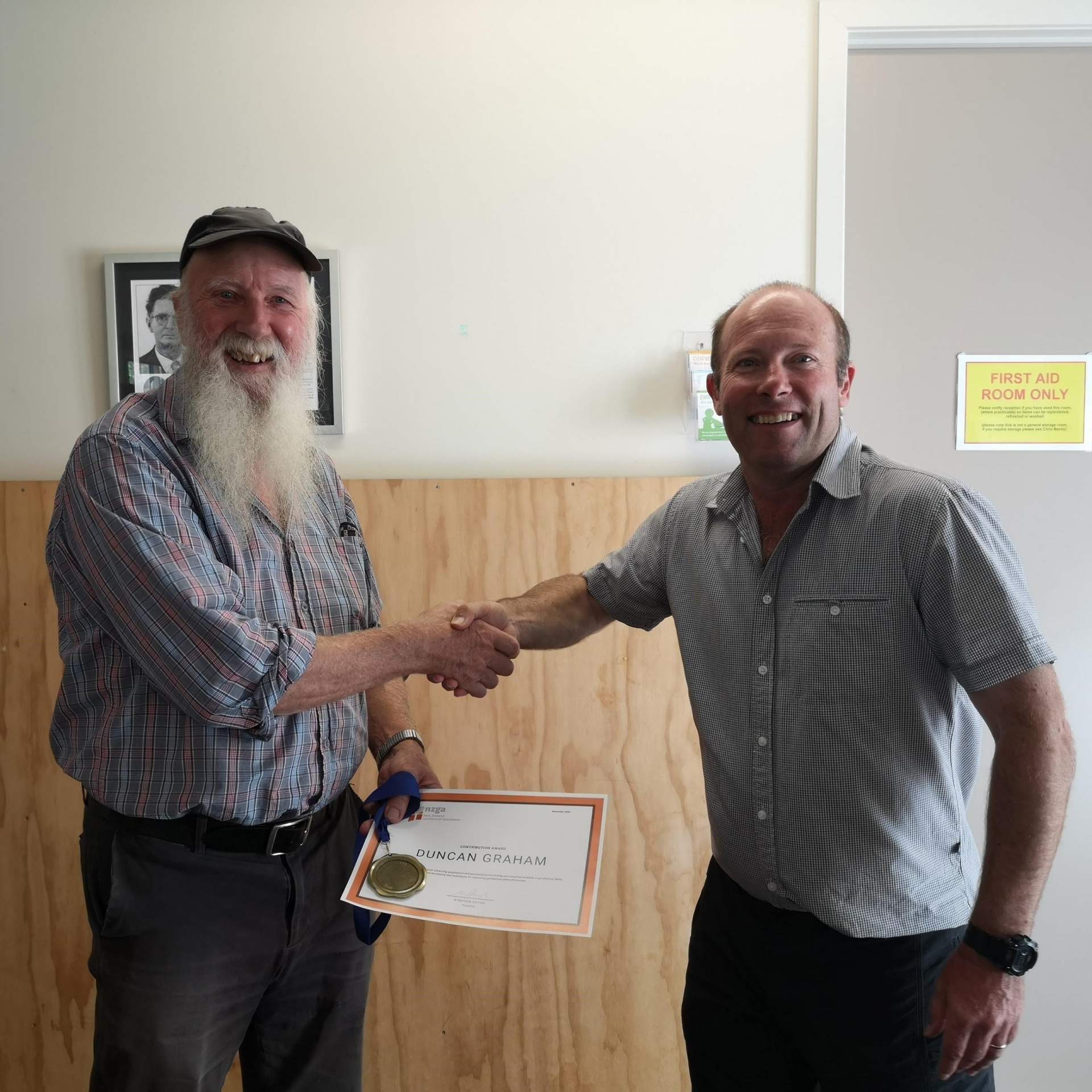 Duncan Graham being presented his Certificate on behalf of NZGA by Rob Reeves.

All in all, the Workshop was well attended and well enjoyed. The organisational team at the University of Auckland outdid themselves with the ingenuity required to provide so much value and support for both the online and in person participants, and the delegates who were there onsite fully appreciated what a fortunate position New Zealand is in right now to be able to hold such conferences.